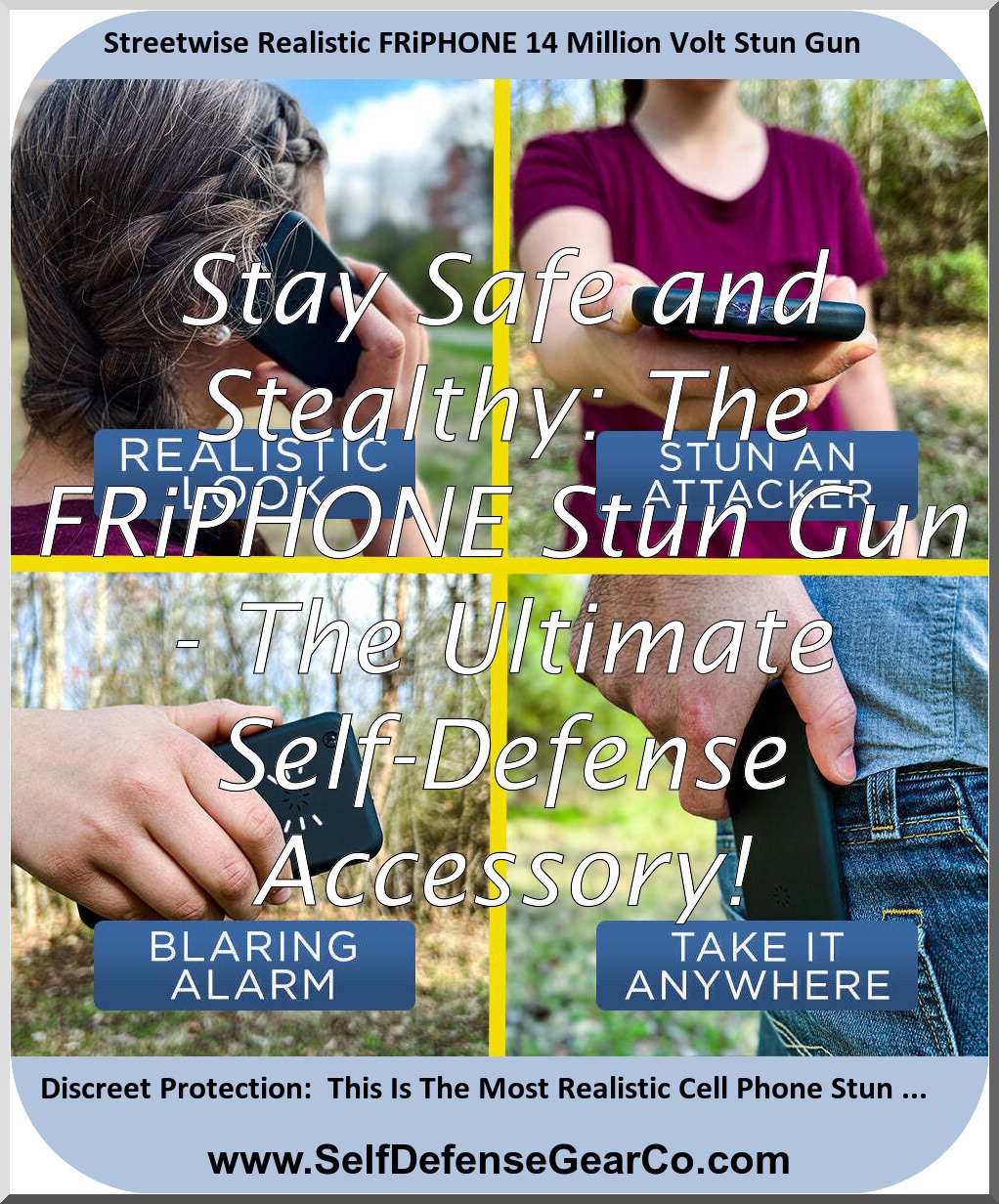 Stun Guns That Look Like Cell Phones are some of the most useful tools for self-defense. First of all, they are very easy to use. No one needs prior knowledge or training to use one against an assailant. Second, they are very effective, which is the reason why law enforcement officers favor stun guns as a tool for non-lethal takedowns. Third, these types of products come in compact sizes, are easily disguised as something else, and can safely hide in plain sight. Find More Information About Streetwise Realistic FRiPHONE 14 Million Volt Cell Phone Stun Gun

What makes a Stun Gun Looks Like Cell Phone such an amazing self-defense product is that the attacker will never see it coming. People just treat these as a cellphone. It’s not perceived as an immediate threat, which will make it difficult for attackers to get out of the way or deflect the attack. At less than 5 1/2″ tall and half an inch thick, the FriPhone is easy to conceal and light enough to take with you wherever you go. It’s also the perfect self-defense stun gun phone for women. Set up is easy.

The batteries for this unit are preinstalled but do need to be charged before its first use. The charging cord (included) plugs into a block charger (not included) which you then plug into a wall outlet. The indicator light will turn from red to green letting you know that the unit is fully charged. You will also want to test the stun phone periodically to make sure it’s in good working order. Sometimes, just test firing this unit into the air is often enough to stop an attacker.

To test it, you simply take it out of safe mode and press the stun activation button on the right side of the unit for just a second. As the electric current pulsates across the top, it creates an intimidating electrical sound. If the sight and sound don’t stop him, a jolt from this unit certainly will. Touching the smartphone stun gun anywhere on the assailant’s body will have an effect. You don’t have to be concerned about the effects of the charge being transferred to you, either. Even if the assailant touches you while being stunned, you will not feel the effects of the charge.

The LED flashlight provides a convenient source of light whenever you need it. Press and hold the LED light button (left side top button) to turn on the light. Releasing the button turns the light off. Slide the safety switch to the right to keep the light from coming on by accident. The International Institute of Criminology says 68 percent of criminals will flee a crime scene if an alarm is sounded, and the stun gun phone has a loud alarm built-in. Violence isn’t something society tolerates, so as a means of self-defense, electroshock devices are one of the best tools you can have in your arsenal.

Buy Cell Phone Stun Gun. This might just be the most realistic stun gun cell phone stun gun for self-defense on the market today. Most other models are big and bulky and look like phones that were popular 10 years ago. The FRiPHONE 14,000,000* Stun Gun looks just like a current smartphone. Although it is not a real cell phone, you will be the only one who knows, and you will be making the right call when you carry it to protect yourself. At the first sign of danger just take out your FRiPHONE and pretend to make a call.

Any bad guy who gets too close to this cell phone will get the message loud and clear that you will not be a victim. Touching an assailant for 1 second will cause minor muscle contractions and repel them quickly. If you touch them for three to five seconds it will cause loss of balance and muscle control, mental confusion, and disorientation. It is advised that the device should not be used for longer than five seconds.

Anywhere you use the high voltage stun gun will be effective but the most vulnerable places on a human body to stun are the upper shoulder, the upper hip, and below the rib cage. All of the effects are temporary and don’t cause any permanent harm but it will allow you enough time to escape from your attacker.

(View Video Below To View This Description) So this product is a stun gun that looks like an iphone. It has an led flashlight, it’s lightweight, it has an extremely loud alarm and it also is usb rechargeable. So that’s the stun gun and that’s the charger.

The stun gun actually has 14 million volts on the bottom of it, there’s a switch for on and off, but there’s actually two different modes. That’s the button to activate the taser, that’s where the alarm comes out of and on the other side, the top button is for led, and the bottom is to set the alarm after putting it in the first mode, the volume up button activates the led light and The volume down button activates the alarm after putting it in the second mode.

When you see the red light, that’s how you know the stun gun is activated. All you have to do is click the button on the side and that’s how you activate the taser.