You find yourself in a public place it could be a school club concert it doesn’t matter know this that once an active shooter situation starts, the shooter has only one thing intent and that’s as kill as many people as possible in the shortest amount of time there is no bargaining there is no reasoning with him he is there to kill we’re all exposed to the Hollywood effect we’ve seen thousands of shootings but they’re not real they’re on television

In fact in 2017 at the Fort Lauderdale Airport we see the Hollywood effect real time when the shooter took his gun out and started firing people froze they froze in place then within seconds they were on the ground the people that knew what to do, ran in the background up the stairs… so forget what you see on TV.

Instead of Reading, Just Watch the Video Below…

You’re going to run you’re gonna hide or barricade or you’re gonna fight back for your life believe your eyes and yours if you hear something that sounds like gunfire move immediately you want to stay off the shooter X what is this about 10:00 a.m. to 2:00 p.m. you want to run in the opposite direction. Keep running until you no longer hear shot if you can’t run hide or barricade.

You could hide behind a curtain in a movie theater you could hide behind something large the mall you want to lock yourself into a room barricade that room with as much stuff as you can. Make sure the window is covered and use your body as a shield to help prevent him coming in he’s not gonna stop at every door.

He’s not gonna look under ever every desk he’s going to the masses so time is on your side if you can’t run hide or barricade you’re gonna have to fight back and what you want to do is go for the gun. Go for the gun, so if you come off on his side you’re gonna grab the gun bring your elbow over the gun take the weight off of that near foot and drop the gun to the ground. Once you get the gunman to the ground you can use blunt force trauma like an elbow or strike them with the gun throw the gun away don’t take it with you when you flee because if the police see you holding a gun you may well be shot.

Keep in mind the key to safety is creating that blueprint a plan of action for most anything that could go wrong you walk into a venue. A public venue you look for the exits know where they are stay out of the public crowds follow the blueprint you can never go wrong. 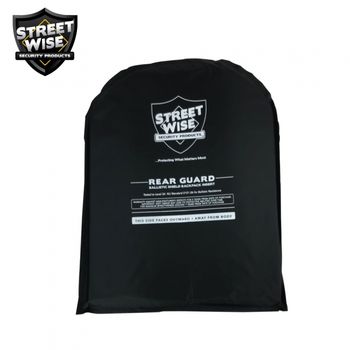 Adding this Rear Guard Bullet Proof Insert to your child’s backpack or just having in your hands during a mass school shooting, adds less than one pound but it can take a ton of weight off your shoulders when you know they are safe at school.

According to Webster’s Dictionary, Rear Guard refers to “the soldiers that are stationed at the rear of a body to protect it from attack, especially during retreat.”

Although most of us will never be on a traditional battlefield, unfortunately our schools, office buildings, concerts, and other public places are all too often turned into war zones that require us to be prepared to take defensive action. Everyone knows to flee at the first sign of an active shooter. The Rear-Guard Backpack Insert from Streetwise Security Products keeps you safe during your retreat. When fleeing is not an option, you can remove your backpack and hold it in front of you as a shield.

Will I really be protected?

The Streetwise Rear Guard Backpack Insert instantly converts your ordinary backpack, laptop case, or handbag into a ballistic shield capable of stopping nearly all handgun rounds (even 9mm and .44 Magnum!) as well as protection from sharp or pointed weapons. But don’t take our word for it; our inserts have been tested by an independent facility to National Institute of Justice (NIJ) Level 3A standards. This is the highest level of protection currently available for lightweight, flexible (soft) body armor.